Everyone is busy early in September picking out fantasy football players for their team and getting prepared for their fantasy football draft party! And the best part of being a Dolphins fan is you can pick Mike Wallace for your team (if you're lucky) and still support the Dolphins. There are eight Miami Dolphins players in the top 300 2013 Rankings for the National Football League and we are here to report the top players from the Chargers so you'll be ready for your draft. Rank 42, Mike Wallace. Rank 51, Lamar Miller. Rank 160, Brian Hartline. Rank 165, Daniel Thomas. Rank 181, Ryan Tannehill. Rank 210, Mike Gillislee.

It's one thing to sit on the couch and watch your favorite football players on the TV, but it's another to get the a game at the stadium to see your players LIVE. Watch them rack up points on the field for your fantasy team. And, as always, go Dolphins go! 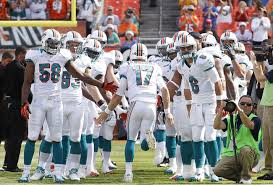