It's all Miami Dolphins sports fans have been talking about. The Dolphins draft! Experts have even given the Dolphins high grades on the NFL Draft. We couldn't be more thrilled! We watched Miami football go bold and pick great players in the first round. 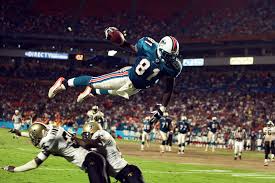 We watched as the Dolphins took Oregon defensive end Dion Jordan in a big move. After the pick, Dion Jordan tweeted: "Here I come @MiamiDolphins! First poster of me in my new colors looks fresh thanks to @Tide http://bit.ly/DionJordan #AboutOurColors #Spon". Looks like no one could be more excited than Jordan!

What's Next for the Miami Dolphins:

Whether Jordan and the other players come into play or not next season, we can't wait to see what happens. Each Miami Dolphin season is unique and it will be more than excited to see who does what.